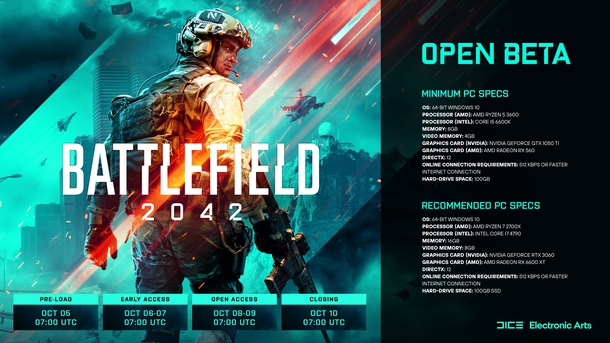 Beta testing of Battlefield 2042 will take place from October 6-10. The developers announced this on the official Twitter of the game.

The preloading of the shooter will begin on October 5 at 10:00 Moscow time. Users who pre-ordered the shooter will be able to start playing on October 6 at 10:00 Moscow time, and open beta testing starts a day later. On the next generation consoles and PC, matches for 128 people will be available on the Orbital Map in Conquest mode. During testing, it will be possible to try out four specialists: McKay, Falk, Boris and Kasper. The developers have also published the recommended and minimum system requirements for running the game on PC. You can see them in the image below.

The release of Battlefield 2042 is scheduled for November 19. The game will be released on PC, PlayStation 4 and 5, Xbox One and Series X / S.