Kaprizov is simply unrecognizable! Russian forward rushes in pursuit of Ovechkin himself 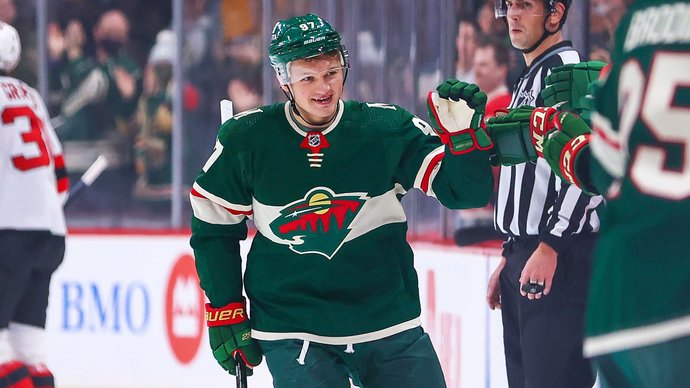 Kirill was scolded for a failed start to the season, and now he is dragging Minnesota to the top of the Western Conference. A stunning makeover.

Russian forward of “Minnesota” Kirill Kaprizov at the beginning of the season was one of the most criticized players in the NHL. The hockey player, who made an amazing debut in the best league in the world, was mercilessly scolded for expressionless actions on the ice, and “Minnesota” – for excessive faith in yesterday's newcomer.

But even under such crazy pressure, Kirill was able to transform. Now our guy scores points in every match and admires the fans again. In a meeting with New Jersey, the Russian scored two goals and gave an assist.

It seems that Kaprizov seriously rushed in pursuit of Ovechkin himself!

The return of the former Cyril after a difficult start to the season was attended by Minnesota coach Dean Evason. He suddenly decided to share the seemingly indivisible couple – Kaprizov and Mats Zucarello. They have been in the top three since the Russian arrived in the NHL and have provided Wild's results at their best. But on November 18, Minnesota's best forwards ended up in different ranks. “It was a definite signal,” Kaprizov admitted.

Evason didn't have to hint twice to his best striker: Minnesota confidently won that match with a score of 7: 2: the Russian gave a brilliant pass to Zucarello, who responded in kind, and the best three of the Whims club – Rusk – Zucarello returned to the ice to continue crushing rivals.

Since then, Minnesota have won six wins in eight games, and it seems that Kaprizov cannot be stopped: in the last eight matches, he scored 17 points. During the same time, “Wild” threw rivals with a score of 20: 4, in 17 of 20 goals, Caprice took part. The Russian forward is now Minnesota's locomotive that is taking the team to the top of the Western Conference standings.

Another regular season match against the Devils turned out to be another piece of art performed by the Russian. In the 12th minute of the first period, he hooked the puck at the side, deftly closed it from defender Ryan Graves, brought it to the goal and accurately lifted it off the ice with a throw into the net.

The second puck of Kaprizov came in the second period and also turned out to be a feast for the eyes: this time he snapped from an acute angle from the red line, and goalkeeper Mackenzie Blackwood, who covered the near corner, still missed between his legs.

The Russian added an assist to the two goals, providing the puck to Tsukarello, who, in turn, passed it to Dmitry Kulikov. The Russian defender chalked up his second goal of the season.

By the way, according to Kaprizov, his attitude to the game at the start of the season has not changed even now: “I have the same mood for matches as before. I don't want to change anything, just stick to my game. Now it works. “

The match with “New Jersey” was the fourth for Kaprizov of the season with three or more points scored. Only three indisputable leaders of the NHL have better performance – Leon Dreiseitl (9 matches), Alexander Ovechkin (6) and Connor McDavid (6).

To these hockey monsters, the top scorers of the league, the Russian pulled himself up in the number of points. Caprice is already in the top five with 28 points in the asset. And his 17 points in his last eight games is the best in the NHL since November 18 among all hockey players. In this form, Kirill is able to catch up with the leaders, and very soon.