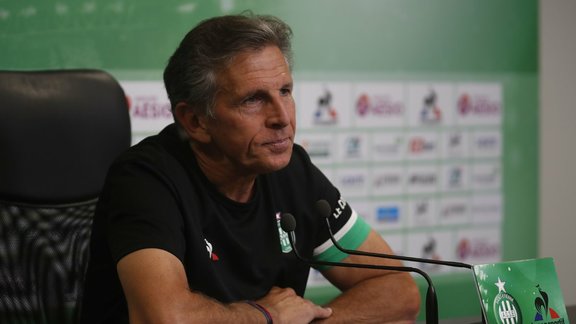 As ASSE continues to follow poor results, Claude Puel is set to play a crucial meeting against Angers on Friday. Present at a press conference on the eve of this meeting, the coach of the Greens was however quite calm when discussing his personal situation.

Red lantern of Ligue 1, the < strong> ASSE finds himself in a catastrophic situation, and Claude Puel is more than ever on an ejection seat. With only 4 points taken in 10 days, the Forez club are unable to do so and will try to secure their first victory against Angers this Friday. The pressure is enormous on the shoulders of the Stéphanois coach, who finds himself in the crosshairs of the supporters who demanded his departure on Thursday at the training center, but also of the leaders, who considered parting with him this week. RMC indeed revealed on October 18 that a crisis meeting had been organized during which Roland Romeyer and Bernard Caiazzo was considering dismissing Claude Puel , but the latter was ultimately retained in his post. However, his departure from ASSE seems inevitable, and the suspension obtained would only be linked to the fact that the meeting against SCO takes place this Friday, preventing the Greens from finding a replacement during this short period of time. Present at a press conference before this last-chance match for him, Claude Puel did not escape this subject in the face of journalists.

“For me, there is no pressure”

“I live it all through my team. I'm not used to putting myself forward. I want to give everything with my staff for the team. There is an environment with a lot of fake news about me, but I don't care. For me, there is no pressure. Everything is centered on my players. I want to see smiles, and the best way is to win. I see progress in our training, and also, paradoxically, between our matches. The players do not go to fight for their coach, but for their club and also because they want to get out of this situation. I'm not going to spread out. My action, I have been leading it for two years, and I am on a mission. I want to stay focused on what we have to do from the next game. I am always present in the field, and I lead the sessions with my staff. I've been doing this since I was a coach, and I have always provided the answers, ”assured Claude Puel this Thursday, in remarks relayed by Goal.