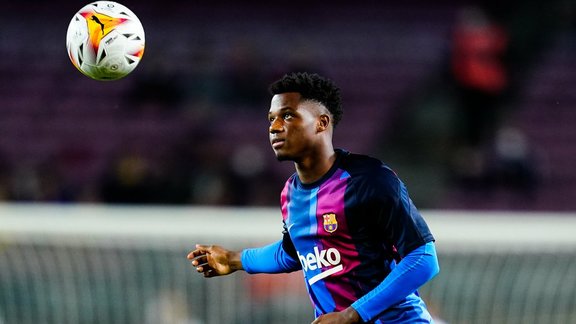 As teams from all over Europe were ready to launch an offensive by offering Ansu Fati a hefty contract, Jorge Mendes is said to have put pressure on FC Barcelona to bring the positions of the two sides closer together. The last meeting would have resulted in an agreement in principle and financial concessions from the Spain international!

After Pedri who officially signed up with FC Barcelona until June 2026 last Thursday, Joan Laporta immediately focused on the Ansu Fati dossier. The 18-year-old Spain international is only linked with Barca until next June, although an option for two more years is in his contract as Mundo Deportivo have pointed out in recent hours. Nevertheless, the club culé would refuse to lift this option, wishing to reach an agreement for a longer period with the one who inherited the number 10 from Lionel Messi to FC Barcelona . Last weekend, President Laporta provided an update on the contract renewals of Ousmane Dembélé and Ansu Fat i by making it known that the two stars aimed to extend to Barca. “His case is the same as that of Dembélé. He has a contract, he wants to stay and we are negotiating ”. However, as El Nacional recently revealed, his agent Jorge Mendes would campaign behind the scenes for a contract commensurate with his client's new standing, and particularly financially speaking. Something that would be delicate for Barça, whose financial health is no longer in question since its president did so in person last August, revealing debts amounting to € 1.3bn. Marca revealed this Tuesday morning that the extension of Ansu Fati is a discussion indeed open to FC Barcelona , but that it is a difficult file to close for the club culé and in particular because of the demands of Jorge Mendes , who is the spokesperson for the claims of the Fati clan.

A foreign threat to FC Barcelona in Operation Ansu Fati?

According to information disclosed by Mundo Deportivo and confirmed by Cuatro, FC Barcelona might not be quiet about the contract extension of Ansu Fati, and this, for a very specific reason which is none other than the competition facing the < strong> FC Barcelona in this file. Indeed, MD assured this Tuesday that training in England, Italy, Germany and France would be reported for Ansu Fati . The PSG would therefore have his sights set on the Spain international, being the only club financially capable of taking on such a gem. La Cuatro confirmed the trend by explaining that in this sense, Jorge Mendes would put pressure on FC Barcelona by emphasizing the presence of biggest European names in this file. Especially since various foreign offers would be more attractive than the proposal made by FC Barcelona . Nevertheless, aware of his client's primary desire to continue at Barca, the Ansu Fati representative is said to be working hard to secure an agreement. And it looks like it's on the right track.

An agreement in principle found in Porto between Jorge Mendes and Mateu Alemany!

At the end of the morning, Mundo Deportivo confided on Tuesday that a big step would have been taken by FC Barcelona in the extension of the contract by Ansu Fati. Football director of the club culé, Mateu Alemany would have gone to Porto to sit around a table with Jorge Mendes in order to reconcile the positions of each of the parties at the level of common ground. And the Catalan daily claims that an agreement in principle has been reached between Alemany and Mendes in this hot file. Regarding the length of the contract, MD explains that the extension would encompass the current season as well as the next five, potentially linking Ansu Fati to FC Barcelona until June 2027. This would have been the initial request of the Fati clan to Jorge Mendes who would have forwarded this request to blaugrana rulers. For its part, SPORT confirms the definite progress of the discussions between the two parties, but puts its finger on a contract that only runs until June 2026, which would then be the same signed last week by Pedri . The trip of Mateu Alemany to Portugal would have made it easier for FC Barcelona in this case. The only thing missing would be the signing of Ansu Fati on Barca's contract offer, who would have given in and made a concession on his initial salary claims. The stage is set.