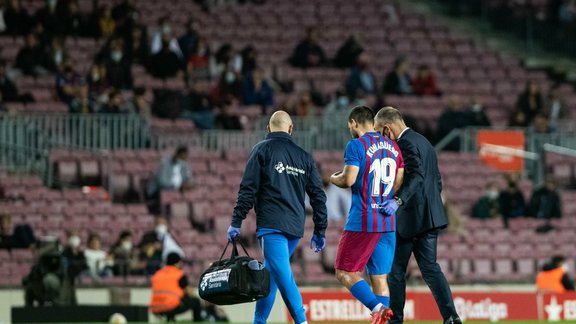 While a retirement of Sergio Agüero is mentioned in the press because of his cardiovascular problems, at FC Barcelona, ​​we would not be on the same wavelength on the issue.

On October 30, on the occasion of the reception of Alaves at Camp Nou (1-1), Sergio Agüero collapsed a few minutes before half-time for cardiovascular reasons. Barca's summer rookie has since been diagnosed with an arrhythmia and could be forced to retire as a result. What Samir Nasri , close and former teammate of Agüero in Manchester City , assured recently. “What if I was criticized for talking about his retirement? No, at all, I had discussed this with him about ten days ago. Because I had started to see the rumor a bit. I had sent him a message of support and he had already responded with a certain hindsight saying that if he could go on good and if he couldn't, well he was just going to enjoy life. Fabrizio Romano released the information this weekend. When I texted him, he just confirmed that to me. After that, I hope that if tomorrow things can change, that's all I wish him, because it's a little sad to stop when it's not your choice ”.

Agüero's retirement would not be unanimous internally!

But what about the FC Barcelona management side? According to information released by Goal, some members of Barca's management committee are said to be keen to make a deal with the Argentina forward so that he can retire due to his health concerns. However, this line has not yet been crossed by everyone at FC Barcelona. It remains to be seen what will be the outcome of the unfortunate series Agüero when his succession would already have was engaged with the Arthur Cabral …