Mercato | Mercato – PSG: Ibrahimovic made an incredible proposal to Al-Khelaïfi … to replace Leonardo! 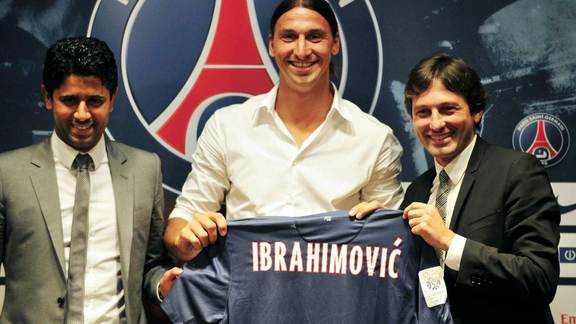 Never with his tongue in his pocket, Zlatan Ibrahimovic has written a new book entitled Adrenaline, My unpublished stories in which he makes many revelations about PSG and not just during his time as a player. The Swede reveals that he has offered his services to Nasser Al-Khelaïfi to replace Leonardo.

In 2012, a year after the takeover of PSG by Qatar, the club from the capital is entered a new dimension with his first major recruit, namely Zlatan Ibrahimovic. The Swedish giant marks an important first transition in the Qatari project. Between 2012 and 2016, the former scorer of FC Barcelona and Inter Milan shone in Paris by its performances, but also by its shattering statements. With Ibrahimovic , the PSG did not however manage to exceed the quarter-finals of the Champions League , while chaining the national trophies . In 2016, the Swede finally left PSG to join Manchester United , but he could well have made a resounding return to Paris this summer.

Indeed, in his new book Adrenaline. My unpublished stories, written in collaboration with the journalist of the Gazzetta dello Sport Luigi Garlando and which will be released in France in January, Zlatan Ibrahimovic makes some succulent revelations about the PSG . The Swede ensures in particular that he offered his services to Nasser Al-Khelaïfi last summer to take the position of sports director. “Summer 2021. It's true, I offered myself to PSG, but not as a footballer. As a sports director. I called Nasser Al-Khelaïfi, the president, and I proposed to him: “If I do not renew my contract with Milan, I will come to PSG and I will restore order to your team”. Nasser laughed, but he didn't say no. Mino Raiola also agreed. He said, “This is your ideal role. You have to go, period.” (…) Raiola knew very well that he could never detach me from Milan, but he agreed with me: if I had not extended the contract, the role of manager at Paris-Saint-Germain, that would have been the good future, ”he writes. Finally, Zlatan Ibrahimovic extended his contract at AC Milan and Leonardo is still in place at PSG . And yet, the Swede adds that his arrival was already very well received in the Parisian locker room where he retained some ties since some players were already present at PSG when Zlatan Ibrahimovic y played in the image of Marco Verratti or even Angel Di Maria . “Even the PSG players I talked to thought so. One said to me: “Zlatan, only you can restore order and bring discipline to the team.” Another: “Zlatan, if it was you, that thing in the locker room wouldn't have happened.” I liked the project but that was not enough to prevent the feeling of fear and panic I felt at the thought of quitting my football career. It is one thing to say it, another to do it. I would have gone to Paris, I would have observed the team's training and I would have asked myself a thousand times: “Why did you stop?” », He concludes on this subject. It remains to be seen whether he will offer his services to Nasser Al-Khelaïfi again in the future as his contract with AC Milan ends in June. next.