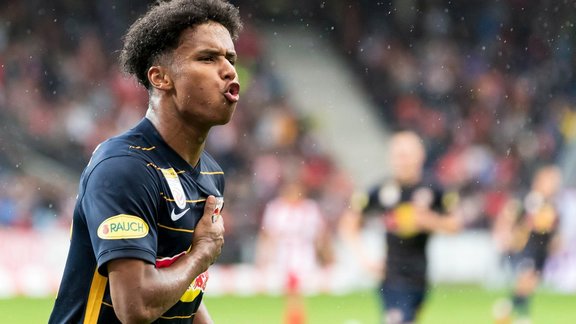 Kylian Mbappé's contract ends next June, which pushes PSG to prepare the succession of the French striker. With this in mind, several names are circulating, but it is the track leading to Karim Adeyemi that is gaining momentum.

At the end of the season, Paris Saint-Germain could have the difficult task of finding the successor of Kylian Mbappé . And for good reason, the contract of the French striker ends next June and if he does not extend, he will be authorized to negotiate with the club of his choice from January 1 in order to engage freely for the next season. And Real Madrid should not let their chance slip a second time. Indeed, this summer, the Merengue club sent several offers to PSG , ranging from 160 to 200M €, but each time, the Parisians were categorical, despite the initial inclinations of Kylian Mbappé . However, the PSG will no longer have the cards in hand in the coming weeks and may well be forced to let Kylian Mbappé go free, without being able to do anything. Aware of the situation, Leonardo ensures his rear, and although the extension of the former Monegasque remains the priority of PSG , the Parisian management is obliged to prepare for the worse.

Adeyemi, the new priority of PSG?

As revealed exclusively by le10sport.com, in the event of departure of Kylian Mbappé , the priority is called Erling Haaland . But faced with the complexity of this issue, PSG is positioning itself on other tracks like that leading to Karim Adeyemi , the new crack of German football. From the top of his 19 years, the RB Salzburg striker has thrown the counters into a panic with already 14 goals scored since the start of the season. And according to information from Sky Sport Germany, the PSG is ideally placed to recruit the young German international (3 caps) whose contract runs until June 2024. Arrived late in the negotiations, Leonardo nevertheless leads quick discussions with the entourage of Karim Adeyemi whom PSG considers “a very interesting player”. A meeting would even be scheduled soon between the club of the capital and the representatives of Karim Adeyemi . In this case, the main competitor of the Parisians will be the Borussia Dortmund which prepares for its part the succession of Erling Haaland . However, according to Sky, Bayern Munich will not be a serious threat. And for good reason, Karim Adeyemi would have rejected the idea of ​​joining the Bavarian club where he would have the role of understudy of Robert Lewandowski . Therefore, PSG would have a real blow to play for Karim Adeyemi .