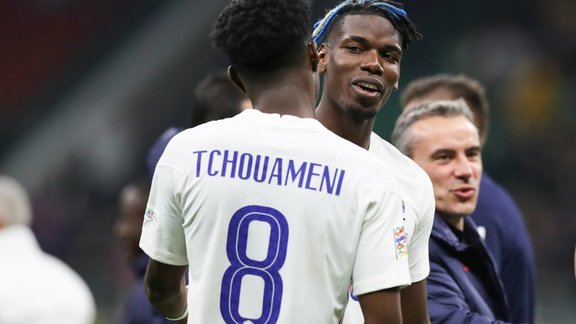 Aurélien Tchouameni's explosion was not lost on Real Madrid, but also on the biggest clubs in Europe.

French youth are popular in Europe. After Eduardo Camavinga, who finally left Stade Rennais this summer to join Real Madrid, is another young international tricolor who stirs up envy. It is Aurélien Tchouaméni, who after becoming a pillar of AS Monaco seems to be starting to make a place for itself in the France team as well. Paris Saint-Germain has of course noticed its explosion, but the task of Leonardo will be colossal. Tchouaméni would indeed have caught the eye of many other clubs, in particular Real Madrid, which seems to want to count on a big tricolor colony next season

Real Madrid should especially beware of Juventus ! According to information from Tuttosport, there would have been contacts very recently between the Turin club, the entourage of the one who is nicknamed the new Paul Pogba , as well as AS Monaco . The daily specifies that Aurélien Tchouaméni would have become over the last weeks the top priority of Juventus to strengthen its midfield, which could in particular lose Aaron Ramsey and Weston McKennie.