Ovechkin caught up with McDavid, Panarin scored an assistant hat-trick. 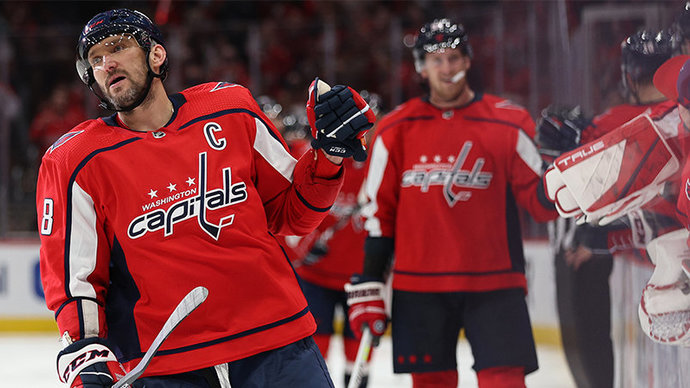 The away match against Detroit was Florida's first since retiring as head coach Joel Kennneville, and today is Andrew Brunett. In the course of the game, the Panthers missed a 2-goal advantage, but thanks to the puck in overtime by Alexander Barkov, who scored a double, the team managed to win its 8th victory in a row at the start of the season. Before repeating the record for Buffalo and Toronto, Florida has two victories left.

Panthers goalkeeper Sergei Bobrovsky continues to be in great shape. Today, the Russian deflected 28 out of 30 shots from Detroit hockey players and was named the second star of the match.

Detroit striker Vladislav Namestnikov spent only 12 minutes on the ice, making 2 shots on goal, 2 power moves and earning a utility indicator of “-1”.

Like Florida, Carolina also managed to remain undefeated. On home ice, the Hurricanes won a landslide victory over Chicago (6: 3), which suffered their 8th defeat in 8 games. At the same time, the hosts won back twice during the first period.

The main hero of the match was Carolina defender Anthony Diangelo, who scored the first hat-trick of Gordie Howe in his career. In the first period, the American closed the pass of Vincent Trocek, in the second – once assisted Sebastian Aho and Andrei Svechnikov, in the third – he fought with Chicago forward Rhys Johnson.

Svechnikov's goal turned out to be rather curious. With the score 5: 2 in the middle of the second period, the Russian tried to make a pass to the penny from the corner of the court, but hit the foot of the Blackhawks defender Jake McCabe, and the puck was cut into the goal. Svechnikov, along with Aho, extended their scoring streak to 7 games from the start of the season.

Thanks to the excellent performance of goalkeeper Igor Shesterkin, the Rangers won a home win over Columbus. The Russian made his first shutout of the season, reflecting 31 shots, and was recognized as the first star of the match.

The best game of the season to date was played by the main star of the Rangers Artemy Panarin. The Russian scored three assists. For the previous 7 games Panarin earned 4 (1 + 3) points. In addition to him, the assistant hat-trick was scored by Rangers defender Adam Fox, and forward Chris Krider scored two goals.

“Washington”, having an overwhelming advantage over “Arizona”, won a “dry” victory. The decisive goal was scored in the 53rd minute by Capitals defender John Carlson, who was guided by Yevgeny Kuznetsov on a throw from the blue line. In total, the Russian scored 2 (0 + 2) points in this game, confidently gaining a foothold in the role of the club's second scorer (5 + 7).

In addition to Kuznetsov, an assist in the episode with Carlson's puck was provided by Alexander Ovechkin, who extended his streak to 8 games from the start of the season. But most importantly, with a throw from his blue line, 29 seconds before the end of regular time, he hit the empty net of Arizona, scoring the 739th goal in his career. Until the fourth place on the list of the best snipers in the history of the NHL, on which Brett Hull is located, Ovechkin has 2 goals left to score.

Washington goalkeeper Ilya Samsonov was named the first star of the match. He saved all 16 shots for his first cracker of the season. Defender Dmitry Orlov spent 19:43 minutes on the ice, having made 3 hits and 1 block-shot with a utility of “+1”.

On Nevada Day, Vegas took a tough win over Anaheim on home ice. In the last 10 minutes of the third period, Anaheim managed to recoup from the score 1: 4, and Ryan Getzlaf became the author of one of the assists. This point was for the Canadian 988th in his career, and he caught up with the record of performance in the history of “Anaheim” legendary Teemu Selanne.

The decisive shot in the shootout was made by Vegas striker Evgeny Dadonov. For the entire game, he spent 16 and a half minutes on the ice, delivering 2 shots on target. In the third match in a row, Dadonov became the author of the final scoring action among the Golden Knights players.

Vegas defender Daniil Miromanov was sent to the AHL a day before the game.

For the second time this season, Ottawa beat Dallas.

Senators striker Josh Norris scored a double, and defender Artem Zub became one of the assistants in the episode with his second puck. The Russian spent 24 and a half minutes on the ice, finishing the game with a +2 utility and 4 blocked shots. Nikita Zaitsev was left with “0” in 19.5 minutes, earning 2 hits and 2 penalty minutes.

Dallas striker Alexander Radulov co-scored Dallas' only goal from Joe Pavelwski in the middle of the second period, extending his streak to two games. Forward Denis Guryanov played only 10:40 minutes, earning “-1” and inflicting 1 shot on target. Anton Khudobin spent the entire match on the bench.