Ovechkin is on a record scoring schedule. Before the legendary Jagr, only 16 goals 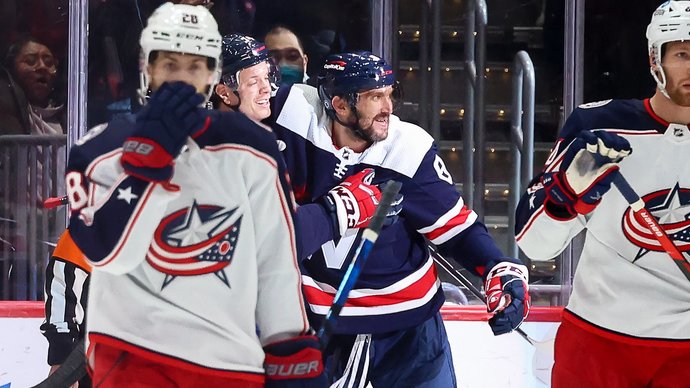 The leader of “Washington” is crushing historic achievements in the NHL. A young goalkeeper from Russia became Ovi's new “victim”.

The captain of “Washington” Alexander Ovechkin at cruising speed is approaching the result of Jaromir Jagr, on account of which 766 goals in the NHL. According to this indicator, the great Czech is in the top three in the history of the league. In the next match of the NHL regular season, the Russian leader of the Capitals scored the 750th goal, reducing the gap from Jaromir by one more puck. She, by the way, turned out to be victorious in the game with Columbus.

Ovechkin is at a crazy pace catching up with the main snipers in the history of the NHL, simultaneously rewriting records.

“Objects in the mirror are closer than they seem”

As you know, the NHL is simply obsessed with records, just give the league a reason to count something. Among the funniest: the number of goalkeepers who played for one team in a season, or, for example, the biggest difference between goals and assists for one hockey player. She, by the way, was recorded in the early 90s by Brett Hull, who scored 86 goals and made 45 assists.

So it comes as no surprise that the league record for the most goals in league history – the most prestigious in the NHL – is something that generates heightened interest from analysts and fans alike. Ovechkin is the only active hockey player in the league who has a chance to create a rustle at the top of the table, which has not been updated in more than five years after Jagr's departure. By the way, after Ovechkin's jubilee goal against the Blue Jackets, the Capitals published a clearly prepared picture with a warning to the famous Czech: “Objects in the mirror are closer than they seem”. The message of the illustration is obvious: beware, Jagr! Ovi is coming.

Another victim of Ovechkin

Moving to the top three, Ovechkin continues to add his name to other lists of record holders along the way: for example, following Wayne Gretzky, he spent the least of all matches to reach the 750 goal mark in his career. However, in terms of the speed of achieving the result, the Russian is ahead of his Canadian opponent. For the last 50 goals, Ovechkin spent only 79 matches, while Gretzky spent 118 matches on it.

Speaking of records: in the meeting with Columbus, the puck of the Russian captain “out of the office” was not only the 750th in his career, but also significant on another occasion. Blue Jackets goalkeeper Daniil Tarasov became the 152nd goalkeeper in the league who could not stop Ovechkin's shot. According to this indicator, Alexander the Great is also among the leaders. 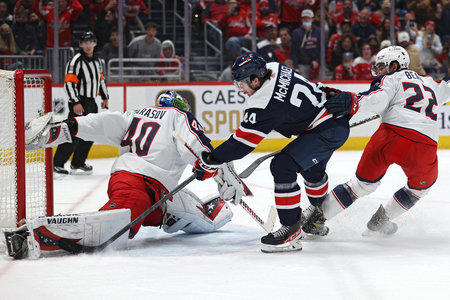 For 22-year-old Tarasov, who has been playing in the NHL for less than a week, being on the list of Ovechkin's “victims” was not only not annoying, but honorable: “He is the greatest player in the world and it was a pleasure for me to play about him,” the Russian goalkeeper said. – When I was a child, I constantly followed Alexander. To play against him is to play against a real legend. “

Ovechkin highlighted their generational difference, recalling that he once played against his father. Indeed, the goalkeeper Vadim Tarasov played for Kuzn, Neftekhimik and Salavat Yulaev, and ended his career eight years ago. Now in modern hockey there is a new goalkeeper by the name of Tarasov – and he has already surpassed his father, having made his debut in the best league in the world.

Not a single record

Gretzky's record is a great motivation that inspires both Ovechkin and all of Washington. Surely, and due to the spirit of the team, among other things, the team is confidently becoming the leaders of the Eastern Conference. However, in addition to the record, the Capitals have a serious motivation to return the golden year 2018 and prescribe the Stanley Cup in the American capital for the next season. This is another secret of Ovechkin's brilliant form, which in his years will give odds to most NHL stars.

Having scored his 20th goal of the season, the Russian became the record holder for the speed of reaching this mark among players over 36 years old in the history of the league. In 25 matches, no one has been able to do this before.

With consistent points in almost every match, the Russian Captain's captain maintains the intrigue in the league's top scorers' race. The top two spots continue to be occupied by prolific Edmonton strikers Leon Dreisitel and Conor McDavid. But Ovechkin does not allow them to break away by more than 3-4 points, confidently controlling the situation from his third place. Apparently, following Jagr's example, the Oilers leaders shouldn't forget that “the objects in the mirror are closer than they seem.”