“The main thing was not to cry.” Russian goalkeeper turned on God mode and conquered New York 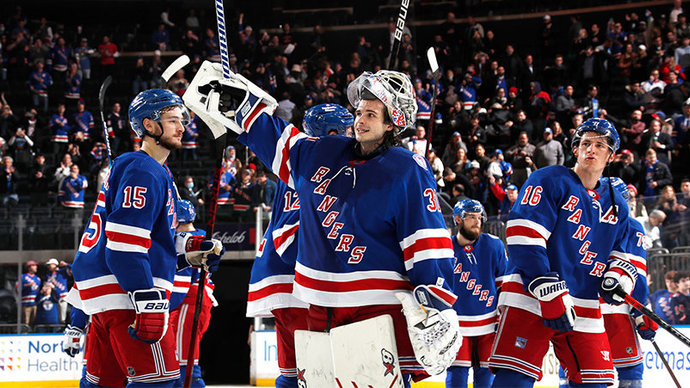 Shesterkin helped the Rangers get another victory and made the stands chant his name. Igor helped out even without a club.

New York confidently beat Philadelphia in the next match of the NHL regular season with a score of 4: 1. Rangers leader Artemy Panarin chalked up a puck and an assist, and Bluesherts goalkeeper Igor Shesterkin was irresistible on goal.

It was the Russian goalkeeper who became the first star of the meeting, missing only one shot out of 34. As you know, Shesterkin prefers intense matches to slower ones, because at a high game pace, the chances of showing his best side are much higher. Such was the meeting with the Flyers, where the Russian goalkeeper pulled out from the corners, it would seem, one hundred percent washers.

Feats with and without a hockey stick

The Rangers quickly created a reserve of two goals, but by the middle of the meeting, Philadelphia was actively involved in the game, throwing over the opponent almost three times. Here the Russian goalkeeper showed himself in all its glory. In the second period, with the score 3: 0, New York grabbed a five-minute penalty in their favor.

The team remained in the minority, but Shesterkin selflessly repelled seven sharp attacks, simultaneously losing the stick. “With or without a stick – Shesterkin was impossible to win in this majority,” the official Twitter of the NHL issued a compliment. By the way, he spent the rest of the minority with the stick of forward Jacob Troba, making three saves – given the difference in inventory, this is incredibly difficult even for a top-level goalkeeper.

The fans in the stands of Madison Square Garden were also impressed and began to chant the name of the Russian: “Igor! Igor! Igor! ” Our goalkeeper perfectly heard the reaction of the stands and admitted that he was very moved. “It’s beyond words, it adds a lot of strength and emotion. The main thing was not to cry, ”he said after the end of the meeting.

The only conceded puck came in the middle of the second period – after repelling several attacks, Shesterkin did not have time to cover the puck that bounced off the skate: Morgan Frost from the Flyers was quicker, driving it into the New York goal.

Panarin scored and was helpful

Panarin put two points into his piggy bank in the second match in a row, first laying the puck on the move to partner Dryden Hunt in the first period, and then putting a major point in the last minute of the game. The Russian clocked Claude Giroud in a foreign zone, took the puck from him and sent it into an empty net. This is the fifth goal of the season for Artemiy. The meeting turned out to be successful for him and from the point of view of usefulness – Panarin left the ice with a significant “+2”.

The Rangers are now on the rise, with eight victories in their last nine matches and are confidently ranked among the leaders of the Eastern Division. It seems that the secret of New York's success lies in Shesterkin at the gate, because his statistics this season is really impressive: 12 wins and three draws in regulation time with only two defeats.