Artemy Panarin: “I'm afraid I won't be an effective Rangers captain. I don't even have English “ 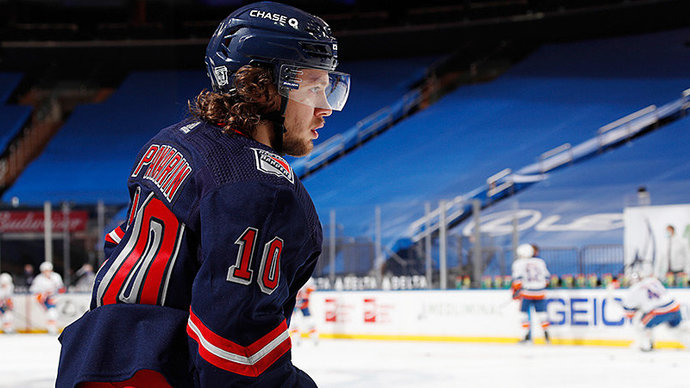 Rangers forward Artemy Panarin went to Instagram “Hockey in the know” and gave an interview, talking about his life.

– Is it true that they want to make you captain of the Rangers?

– I don't know where the wind is blowing from. Nothing like that happens here. I do not know. Surely someone is thinking about it. We don't have a captain at the Rangers, and we need him. But we don't talk about it in our locker room.

– How do you choose the captain?

– Honestly I do not know. But not by voting. And last year we didn't have a captain. Only four assistants. I think the decision is made at the level of the coach and the general manager.

– Would you like to try yourself in this role? And you were the captain before?

– Yes, as a child – they sewed a huge letter “K” on my sweater so that I could see from a distance who the cap was.

In fact, there are much more worthy candidates for this position. I would like to? Probably not even, to be honest. It is not easy to stick a letter. And walk, take pictures with this T-shirt. That's a lot of rough work in the locker room. It's not just good to play hockey. And between periods, spend extra energy to inspire, motivate: “Come on, guys, let's work on this!” Doing a bunch of interviews, being the face of the club. A lot of work outside the hockey rink. And I seem to play hockey normally. And even then with varying degrees of success. I'm just afraid I won't be an effective captain. I don't even have English. Whom will I motivate there ?! I can only influence the game. But they will listen to me without any letters.

– Do you have any progress in learning English?

– I have been asked about this for the seventh year! There is no enlightenment! I will play very well so that it would be interesting to listen to me even through an interpreter. This is my plan so far.

– Why do players have no style in the KHL, but should they get into the NHL – just a suit, a haircut?

– Is that a hairstyle or something? Panarin slaps his curls. – Because the NHL has been a tradition for a long time. All teams and players wear strict suits. And this is generally a way out. You can be any collective farmer you want. But you go and buy a black formal suit and you look normal. A win-win! You can only make a mistake in the size of the suit. Or choose square brick shoes. And with the usual style – some in a tracksuit, some in jeans, some in torn shorts. And it turns out not a team, but a circle of like-minded people. And they go to the stadium as a hobby.

– But the KHL introduced costumes many years ago.

– I didn't attack the KHL! And what, have all the teams in the league switched to civilian costumes? In my time, they gave out tracksuits. And I was always out of size. I had to hem my pants all the time. Twist them in the belt. In fact, it's cool and it should be. I know many guys don't like the fact that it is uncomfortable to fly in suits. And in sports sweatpants lay down. But I'm used to suits, and you look decent in them. And yet – there are stylish guys who know how to dress beautifully. And there are those who do not. And so they go to the game together, their camera is filming. And they look a little strange.

– Do you have any desire to release your own line of optional sportswear in the future?

– Do it yourself – no chance. I have no good taste and understanding of how to do all this. If some cool team comes and we arrange some kind of collaboration – then I'm in favor. And to myself – for me it is a dark forest.

– Your friend Sergei Bobrovsky left the media radar. How is his preparation going?

– Everything is gorgeous with him, as always. A contented person with life. Preparing, as always, is serious. I think he is among the top athletes in the world in training. That is how deeply he devotes himself to his work, devotes a lot of time. He can train a nail for forty minutes! He's one of these people.

He even develops his toes so that he can perform various tricks with his feet. You can't go to the gate to throw it, you force yourself. Yes, you love what you do. But Bobrovsky works as much as possible, devoting a lot of time to this.

He came to St. Petersburg, we saw each other. I visited my homeland in Novokuznetsk. We call each other, everything is fine with him.

– What do you get from a trip to Altai? And where would you like to visit?

– In the last year it was not possible to go, because the season before that was contractual. I had to fly to America one more time. And this year I spent more time on Korkino. I really enjoyed my homeland this year. I went there by car, without a T-shirt. He turned off the condo straight, opened the windows so that hot air would blow in the face. Fine! So far, I am not planning anything, and now this is difficult due to the coronavirus. I gave up guessing. Closer to next summer I will think. And now the season is in my head. And these trips give … I like nature. I took maral baths there. Mountains, beauty, we lived in tents, we didn't wash our hair for 10 days. As you can imagine, it is “delicious” for Alice to live with me.

– What are your thoughts and expectations from the trip to the Olympics?

– It's good news if the NHL players go to the national team. One positive. Every athlete wants to compete in the Olympic Games.

– Is it true that you want to work as a coach at your Arena Play?

– A coach of me is … I just want to be smart! – Panarin laughs. – But my attitude to this topic is changing. Before, I was categorically against: what kind of coach is there ?! Fly somewhere? How is your family? But now I'm not so categorical. But it's too early to talk about it. I hope to play some more hockey. In general, this is a good thing for hockey and for our country. I know something anyway. And why not share your thoughts?

And such projects are an opportunity to convey your thoughts to the younger generation. I am convinced that I have interesting views. I do not pretend to be true that this is so. But I think I can help you with something.

And this project is an opportunity for me to transfer experience. The financial component is not in the first place here. Although all this does not need to be turned into charity. Otherwise, sooner or later it will be bent. There are some price tags for this. And my team will try to develop this so that there is some kind of economy. So that it is elementary to buy new exercise equipment for children. If we go the other way, then I will live in a tent all the time in Altai.

Now we are at the home stretch. We are finalizing the throwing area where I would like to convey my thoughts. I was already waiting for my assistants to open everything there. Yes, and people, I think, are interested. Opens in October? So that's great.

Panarin played 42 matches in the last NHL season, scored 17 goals and made 41 assists.