Aslan Karatsev: “I still have a goal with all my might to get to the Final Tournament” 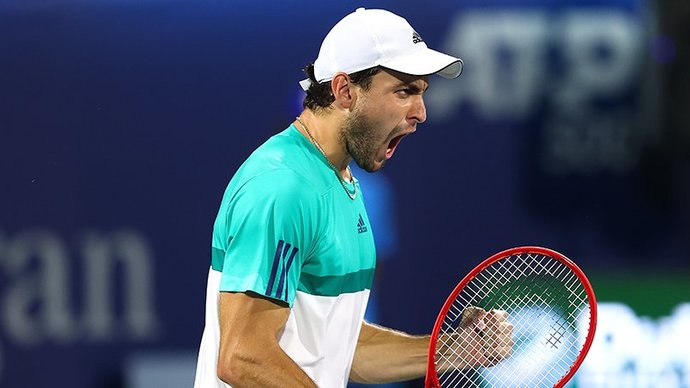 In the final, he beat Croat Marina Cilic.

– I set a goal with the team – to get into the top 20. It happened at the moment. I am very happy. I felt very comfortable in the game. At the end of the match, I lost my nerves a little. I almost lost my serve at 5: 4. More or less calmed down, pulled out a long rally at his break point and managed to close the match.

– Get into the top 10. So far, I have a goal with all my might to get to the Final Tournament in Turin. I will try to play all the tournaments. It will be seen whether I get it or not. There are chances.

– What was your plan for the game with Cilic?

– His first serve did not work as well as he usually serves. When he has his first serve, it's hard to play against him. That is, he takes the initiative with the second or third blow. Today he has a small percentage of first serve. So it was easier for me. I tried to vary my pitch. Make him move all the time.

– Were restrained on emotions after the victory. Is that always the case with you?

– It depends. I usually react. I'm not playing anything. As it is. I have no answer to this question.

– Will you have time to celebrate the victory in Moscow?

– I think that I will not particularly mention. Let's go to dinner with our team. Tomorrow or the day after tomorrow I will go to St. Petersburg. Since I don't play the first round, I have time to rest, recover and prepare for the tournament.

– Do you feel tired physically or mentally?

– I do not feel quite fresh, but there is confidence, the game. I have to finish all these tournaments and continue to play the way I play.

28-year-old Karatsev took the second title under the auspices of the ATP. Thanks to this victory, he will become the 18th racket in the world.