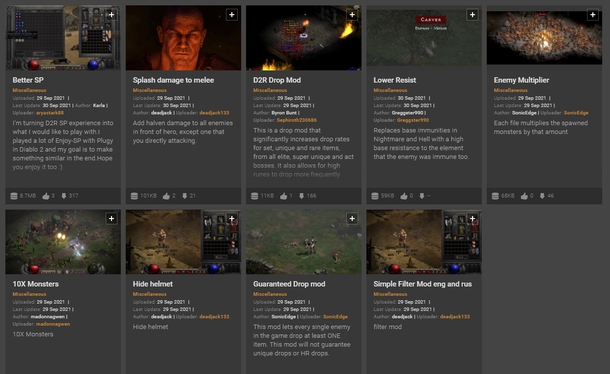 A few days after the release of Diablo II: Resurrected, fans of the franchise began releasing the first mods for the remaster. With homemade patches, enthusiasts have added expanded inventory and some unique gameplay mechanics to the game.

At the time of publication of the material on the Nexus Mods website, nine mods for Diablo II: Resurrected have already been uploaded. One of them allows you to significantly expand the character's chest and backpack, as well as increase the number of tabs for the general inventory on the account. With the help of other mods, you can set the multiplier of mobs and the chance of dropping items, add a splash damage modifier for melee fighters, hide the worn helmet, etc. All this became possible due to the fact that the Vicarious Visions studio, when developing the remaster, changed only the visual part of the game , and all the technical “stuffing” remained practically untouched.

Diablo II: Resurrected was released on September 23rd. The game was released on PC, PlayStation 4 and 5, Xbox One and Series S / X, and Nintendo Switch. Users criticized the remaster: according to users, the title turned out to be unplayable due to a large number of bugs.