Elena Vesnina – about the Olympics: “I had no idea that I could get in shape, perform at a level and keep it throughout the tournament” 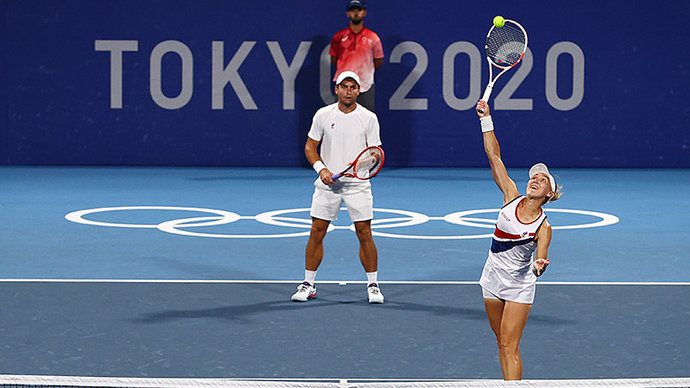 Russian Elena Vesnina shared her impressions of her performance at the Olympic Games in Tokyo.

– The Tokyo Olympics are the fourth for you. How does the attitude towards the Games change with each new trip?

– When these are your first Games, there are a lot of emotions. You don't know how to deal with them, because everything you see is puppy delight. First, the best athletes from different sports. In Beijing, I saw Kobe Bryant, LeBron James, Elena Isinbaeva. Great champions, whom you respect, and you understand that these are legends. In Rio, we saw Usain Bolt, and although it was already my third Olympics, the excitement was no less strong. But it interferes with the performance a little, because you are distracted.

The tournament is very different from the “Grand Slam”, because you have to walk a lot: from the Olympic village to the canteen, from there to the bus stop. In this regard, tennis players on the tour have comfortable and greenhouse conditions. Everything for us: you leave the hotel, get into the car, she takes you to the courts – you don't waste time anywhere. And at the Olympics, you spend a lot of time just to get to the canteen, to stand in line there, to stand in line on the bus. All these moments distract and take away strength, which is very important to preserve. Plus a lot of pressure. When you get there, you understand how everyone wants to win a medal, how important it is for everyone. You also want it madly, and when you want it too much, it breaks with desire, it's bad. You need to be able to set yourself up correctly. Probably, at the third Olympiad in Rio, I got a clear understanding of how to behave, what to do and what mistakes to avoid.

– The fact that couples from Russia met in the mixed finals, as- what affected your emotional state?

– I can say for sure that this made our task a little easier. Firstly, both teams reached the final, there is definitely a medal. Therefore, we were setting ourselves up as a very important match. Nobody put pressure on themselves, although the pressure was still there. I and all the guys, I think, felt responsibility and excitement, there was a nervousness somewhere. Still, playing in the Olympics finals is incredibly stressful. I have never experienced such stress in my life. But this is some incredible sporting pleasure, because you have reached the final stage, you are here.

Every time I remember and think: how many worthy athletes were left without medals. They were worthy, they were ready, they wanted to, they burned, but it didn't work out. And I didn’t play for three years, I returned after the birth of a child and I am leaving with a medal. I could have left with two, but, unfortunately, I didn't manage to win the bronze. But I understand that this is an incredible success. Honestly, I myself did not expect that I would succeed in such a short period, because I played only six tournaments before the Olympics. I had no idea that I could get in shape, perform at a level and keep it throughout the tournament. Plus the difficult weather conditions, which took a lot of energy. You can say that I was exhausted by the end of the tournament.

– After the finale, you cried, as you explained later, because of the confusion of feelings. Did you still have an offense?

– Of course. It was accumulated because I was very upset after we lost the match for the bronze. I couldn't believe this had happened. I still don’t understand why we didn’t win. Plus a long three-set mixed match, in which we again led, again we had a matchball – and we lost again. Then I realized: everything, Lena, is over. You already have this silver medal. Yes, it could be gold. At that moment, tears flooded by themselves, I could not even control myself.

Usually after the finale there is some time to come to my senses, but here everything somehow quickly happened. And for so long everything dragged on until the final, a long match. I could no longer control myself, I just wanted to hug someone and cry into someone's waistcoat, ”Vesnina said.

At the Tokyo Olympics, Vesnina, together with Aslan Karatsev, won a silver medal in mixed doubles, in the final losing to compatriots Anastasia Pavlyuchenkova and Andrei Rublev.