Mercato | Mercato – Barcelona: Jackpot for Ronald Koeman after his departure! 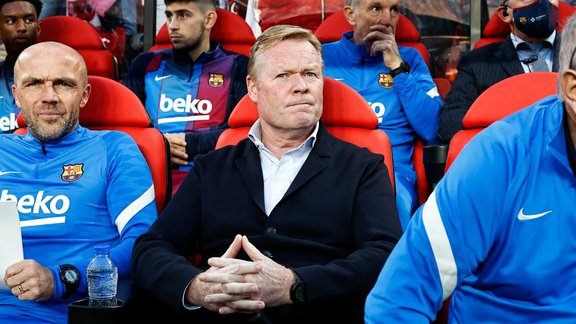 While FC Barcelona made the decision to dismiss him on Wednesday evening, Ronald Koeman will touch a small fortune following his departure from the Catalan club.

Comforted by Joan Laporta before the international break, Ronald Koeman was finally sacked by FC Barcelona following two new defeats against Real Madrid and then against Rayo Vallecano from Madrid this Wednesday evening. The Catalan club have announced the departure of the former Netherlands manager overnight, while Xavi's name is now the favorite in the press to take over. And for his part, Ronald Koeman will now have the opportunity to touch a nice jackpot if we are to believe the latest echoes from Spain.

Indeed, El País indicates that the dismissal of Ronald Koeman will cost around 12 M € to FC Barcelona . A heavy sum for the finances in the red of the Catalan club, while knowing that Barça have not yet paid the severance payments of Quique Setién . It now remains to be hoped for the Barça that the new coach introduced on the bench – probably Xavi – will manage to register in the duration on the Catalan bench so that the FC Barcelona could spare itself new severance payments to be paid.