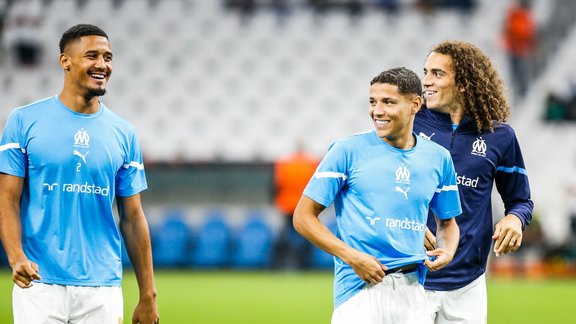 A goalscorer in his debut at the Orange Vélodrome, Amine Harit spoke about this crazy experience at OM and his first steps in Marseille.

Having been trained in FC Nantes , where he only made one season in the professional world, Amine Harit returned to Ligue 1 during the last offseason by signing for OM after four years at Schalke 04 . Indeed, President Pablo Longoria managed to come to an agreement with the leaders of the German club for a one-season loan. Arrived at the beginning of September, Amine Harit scored his first goal with OM during his first outing at the Vélodrome on September 19 against the Stade Rennais (2-0). This Thursday, the Moroccan international returned to this special experience in front of the raging supporters of OM in and outside the stands.

“My car was almost broken at the end of the match, it was is that Marseille, it is excess in everything »

“First match at the Vélodrome, goal. A strong, strong, strong emotion. You should know that the Vélodrome is the best stadium in France, clearly by far, even in the best stadiums in Europe. When you score on a Sunday at 6 p.m. in front of 60,000 people and you feel like the stadium is going to collapse. It's a crazy thing. I liked. My car almost broke at the end of the game (Laughs). But that's okay. There are too many fans at the exit when it wins. When you go out in the car, everyone is banging, but they're happy, it's joy. Except that they can't control their joy. And that's Marseille, it's excess in everything and that's what I love. I am close to a lot of players. Boubacar Kamara, Matteo Guendouzi, Dimitri Payet. In the locker room, don't miss out, because there are big fat roomers. Whether Payet, Pape Gueye or Jordan Amavi, there are specimens anyway. The atmosphere is wonderful “. Amine Harit said in an interview with foot.fr for The Football Story.