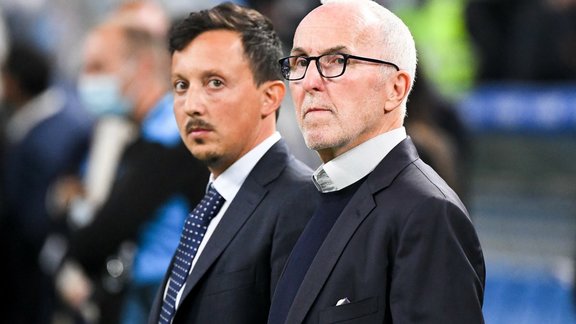 Despite the many denials of Frank McCourt, the Bostonian would still intend to sell OM. But Saudi Arabia should not succeed the American businessman.

The sale of the Olympique de Marseille continues to keep Marseille fans in suspense. And for good reason, the rumors are numerous in this file and essentially maintained by Thibaud Vézirian . The independent journalist assures since the beginning of the year that the OM will be sold to Al-Walid bin Talal and still confirmed his information a few days ago: “I have the proof, I have transfers, contracts, my sources have not lied to me, I have confirmations every week. Very, very high-level sources, senior officials, lawyers. I have no problem there. I don't have a date to give but you can rest easy … “And yet, the denials follow one after the other. Frank McCourt himself repeated at the microphone of France 24 that “the club is not for sale. “For his part, the English journalist Ben Jacobs asserted that “the PIF has never seriously considered buying Marseille despite long-standing rumors that say the opposite. “So hard to see clearly in this file.

In a Space on Twitter, Romain Molina tried to disentangle the true from the false. For starters, the reporter assures us that the Saudis “have never been there. And even less Walid Bin Talal. Let him already pay what he owes the Crown Prince of Saudi Arabia. It makes me laugh people who talk about him. And I have no idea what's going to happen at OM. Therefore, the OM should not pass under the Saudi flag in the coming weeks. However, this does not mean that Frank McCourt has completely ruled out the idea of ​​selling the club. According to Romain Molina , the Bostonian even has a very precise plan, namely to ensure that OM qualify for the Champions League in order to promote the club and attract investors. This is the reason why Frank McCourt made significant financial efforts this summer to strengthen the workforce of Jorge Sampaoli . “OM, you have to leave it in the Champions League to sell it. So I still haven't changed my position in a year and a half. This is still the case, even not with the rest. But that's why people were saying, why OM has reinvested this summer, is that OM needs it economically. Because if you want your club to be economically attractive and get a better deal, well you need that. It's that simple. Here is what I can say, do not get carried away. After I said nothing else, that's the plan they have. And which is also logical because your club must be the highest so it's normal and good luck obviously at Olympique de Marseille at this level ”, assures Romain Molina .