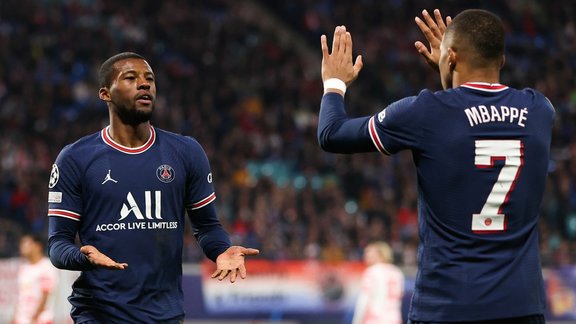 After a sluggish start to the season, Georginio Wijnaldum made his return to PSG's starting lineup against RB Leipzig. And the Dutch international scored the two Parisian goals which allows him to finally launch his adventure in Paris.

In the absence of Marco Verratti , hit in the hip against OM , Georginio Wijnaldum had an opportunity to distinguish themselves against RB Leipzig on Wednesday evening. And for good reason, the Dutch international, who arrived free from Liverpool , had a sluggish start at PSG . Present at a press conference before the trip to Germany, Georginio Wijnaldum recognized that he had to do better. “I think the most important thing I have to learn is to get to know my teammates. I haven't played with any of them. We work hard in training to get used to it. It's a new start for me ”, assured the captain of the Netherlands who was therefore starting against Leipzig in a fairly offensive role that allowed him to shine. Indeed, Georginio Wijnaldum scored the two goals of PSG (2-2) and could have further improved his statistics by being credited with two assists if Angel Di Maria had more success on his volley or if Kylian Mbappé had been more skilful. But the former Reds seems to have started his season.

Wijnaldum is starting his season!

This performance could well be the trigger for Georginio Wijnaldum who therefore had a complicated start at PSG . In any case, this is what the Dutch international wants. “Hopefully! I work hard every day, I have to get to know my teammates and hope that I will continue in this dynamic and help the team, ”said the former Liverpool player in the mixed zone. At the microphone of RMC Sport, Mauricio Pochettino also welcomed the performance of Georginio Wijnaldum. “It is very important to have scored, especially for a player who has just arrived, for his confidence. I'm happy with his performance, “said the PSG coach before adding a layer at a press conference:” We cannot predict the future, travel through time. As always, we will use analysis of player performance as the basis for deciding the roster. We have a squad of 33 players. Each player can have these kinds of moments, it is just up to us to make the decision (to line them up or not). I'm glad Wijnaldum scored those goals. “Anyway, the return to form of Georginio Wijnaldum is timely for PSG who must do without the services of Marco Verratti while Idrissa Gueye and Ander Herrera are struggling to maintain the level they had at the start of the season.