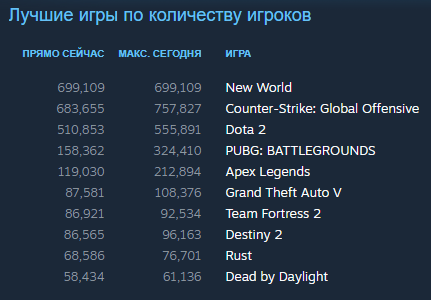 Amazon's new MMO – New World – has become the leader on Steam online today. According to Valve's digital store, at the time of publication of the material, there are almost 700 thousand people in the game – more than in any other title of the service.

This influx of users has caused large queues at the entrance to the servers. In some cases, the number of people waiting for the opportunity to get into New World exceeds 10 thousand. Players massively complain about this problem, and the developers have already reported that they are trying to resolve the situation.

The release of New World took place on September 28th after repeated postponements of the release date and several stages of testing. More than 910 thousand people are following the release of the MMO on Twitch at the time of publication.