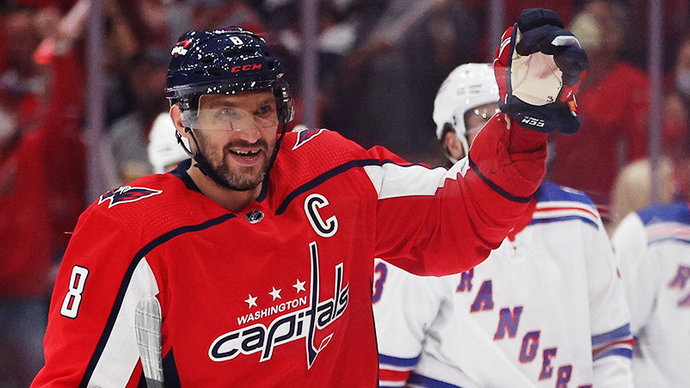 It is necessary to open the season in a fighting way, for the holiday and a suitable rival is needed. Washington and Rangers have become bitter enemies in recent years. The May battle is still fresh in my memory, when Tom Wilson first hushed Buchnevich like a bear, and then threw his head on Panarin's ice. And in general, there is something to remember about the last pandemic season, in which the teams met 8 times.

So it was impossible to find a better opponent for the opening match for Washington or Rangers.

Before the game, the main question is whether Ovechkin will play or not. In his last preseason game with Philadelphia, Ovi injured his leg while trying to pull off a tough hold. He missed two workouts, but went on the ice on the eve of the game.

It turned out that only experts were guessing, Ovi himself had no doubts.

Already in the fifth minute, the hosts opened the scoring: Kuznetsov and Ovechkin cut the Rangers zone with transverse passes, Georgiev lost the puck in the commotion at the goal, and she was behind him, which was first noticed by TJ Oshi.

The second goal came in the middle of the second dvadtsatiminutka, again in the majority. Again Ovechkin – Kuznetsov, and then Schultz launches from the blue line.

And then, in less than half a minute, the hosts score the third. 19-year-old debutant Hendrix Lapierre scored in his first NHL game in response to those who think Washington's squad has aged. TJ Oshi, who gave the assist, was so happy for the young man that he almost shook his whole soul out of him. It can be seen that the atmosphere in “Washington” is still wonderful.

Well, then it was time to score for Ovechkin. At first, in the majority, he watched the rebound from Georgiev. With this goal, Ovi caught up with Marcel Dionne on the fifth line of NHL snipers in history.

And then, already in the minority, Kuznetsov calculatedly threw into the rounding of the side, and Ovechkin was the first to bounce the puck, which jumped out onto the patch.

And now the captain of “Washington” is alone the fifth among the best.

By the way, Dionne has already congratulated Ovechkin, promising to wear a Capitals cap all day.

The next goal is Brett Hull, 9 goals before him, and towards the end of the season Ovi will probably become the third: to Jagr – 34 goals.

I must say that Ovi in parallel established a few more minor achievements.

First, it turned out that for the first time in his long career, he scored in one game and in the majority and in the minority.

Secondly, the majority goal was the 270th in his career, here Ovi is the second, but the leader Dave Andreychuk is very close.

Third, Ovechkin scored more than one goal in a match for the 150th time. Here he is the fourth, and the leader is Gretzky, who has 189 such games. Judging by the previous career pace, it is really possible to become the first in four years.

Fourth, Ovechkin scored 3 points in the power play and became the second active player to reach the 500 mark.

Fifthly, the captain of the capital team is now the third in the number of goals in the starting matches of the season. There are 13 of them. Here you will have to wait at least a year, unfortunately, the opening day of the championship is only once a year.

Now Alexander has 502 (270 + 232) points, when Washington had a numerical advantage, the leader here is 42-year-old Joe Thornton (545). No one doubts that Ovi will be the first among active players. The question is what will happen first: Ovi will catch up with the unfading Jumbo or the main bearded man of the NHL will have time to end his career.

Well, in the championship that started with 4 (2 + 2) points, Ovechkin immediately captured the first line of NHL scorers.

Kuznetsov was named the second star of the match with three assists. By the way, Evgeny also has a small anniversary – the 100th game with 2+ points.

The third ovation from Capital One Arena was received by goalkeeper Vitek Vanechek, who saved 23 shots out of 24.

What about the Rangers? The only goal was created by Chris Crider. Artemy Panarin spent almost 18 minutes on the ice and never hit the target. Goalkeeper Alexander Georgiev finished the match with a low percentage of reflected shots – 81.5 (22 out of 27). Igor Shesterkin sat on the bench and will now play next night against Dallas.