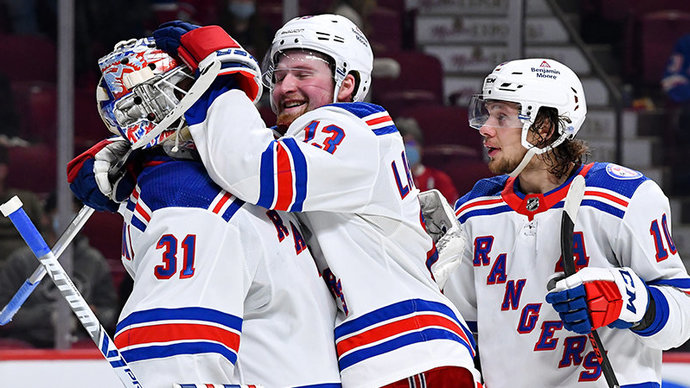 Of the many NHL matches that took place last night, we celebrate the successes of the Russian players and start with the goalkeepers.

The Russian Rangers goalkeeper saved 31 out of 32 shots and became the first star of the match. New Yorkers won their first victory under new coach Gerard Galland.

Artemy Panarin spent 22 minutes on the court and made an assist in the episode when Chris Krider opened the scoring in the majority. And the winning goal scored last year's first draft pick by Alexi Lafreniere.

The Islanders kick off the season with a unique 13-game away streak. This is due to the preparations for the season of their new home, UBS Arena. While away “Islanders” play unsuccessfully, after the defeat to “Carolina” followed by an even bigger one from “Florida”.

Ilya Sorokin conceded 5 goals after 29 shots, and in two matches there were already 10 goals in his net.

Sergei Bobrovsky was on top, 29 saves after 30 shots and the title of the second star of the match. The first to be recognized was Sam Bennett, who scored a hat-trick.

The Stanley Cup winners came to Washington and took the victory away from the capital, despite the hosts' playing advantage. The score was opened only at the end of the second period, although there were enough opportunities, but the goalkeepers played excellently, primarily Andrei Vasilevsky, who saved 32 shots per match. Only Ovechkin made eight shots, one of which became accurate.

14 seconds after the first goal, Ovechkin could have made a double, but after watching the video, the judges decided that the puck did not cross the line. Who stole the goal from Ovechkin, Vasilevsky or the referees, decide for yourself.

In the third period, Russian defender Mikhail Sergachev equalized the score with a shot from the blue line, and in overtime, captain Steve Stamkos brought Tampa to the top of the NHL scorers list with 7 (3 + 4) points. But Nikita Kucherov did not finish the match, in the third period he was injured in a harmless situation.

– We need to figure it out. I am not a doctor. I haven't even seen the episode replay on TV, so I can't tell you what happened to it. He will be examined when we return home. He is a tough guy, I hope nothing serious happened to him. But it’s too early to tell what happened, ”said Tampa coach John Cooper.

Ovechkin is now eight goals behind Brett Hull on the list of all-time snipers, but he is now also fifth in total goals in regular season and playoffs.

The 21-year-old Russian forward has a great start to the new season. Two goals in the opening match and one more today. Svechnikov brought Carolina forward at the start of the third period with a wrist shot from the left throw-in circle.

Carolina goalkeeper Frederick Andersen was named the best player of the evening, and Svechnikov became the second star.