Mercato | Mercato – Barcelona: A threat to 120M € in the soap opera Ansu Fati? 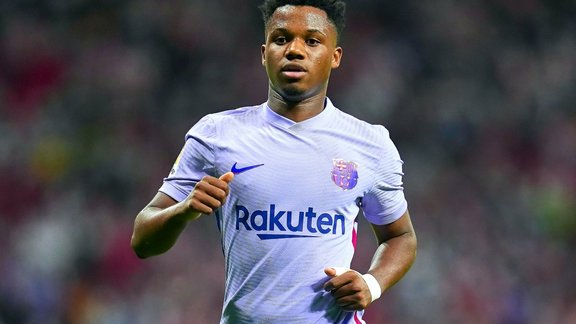 At the end of the contract on June 30, Ansu Fati could have left FC Barcelona before signing his new lease. Indeed, Manchester United would have offered a contract of 15M € net annual to the Spanish crack a little more than a year ago and would have been ready to release around 120M € to snatch it from Barça.

Trained at FC Barcelona, ​​Ansu Fati was hired until June 30, 2022 before signing a new lease this Wednesday until 2027. And before extending his crack of 18 years, Barça would have been very hot. Indeed, Liverpool would have attempted an approach when Ansu Fati was recovering from his knee surgery and would have offered a contract of nearly € 15m net annually to the player according to Mundo Deportivo. And to believe the Spanish media, another cador of the Premier League would also have broken his teeth for Ansu Fati.

According to Mundo Deportivo, Manchester United would have taken action a year earlier for Ansu Fati. Indeed, the Red Devils would have also offered a contract of approximately 15M € net annually to Jorge Mendes, the player's representative. And while Ansu Fati was not at the end of his contract at the time, Ole Gunnar Solskjaer would have been ready to pay a sum close to 120M € to bend the FC Barcelona. Finally, Ansu Fati has joined neither Liverpool, nor Manchester United and has just renewed his contract with Barça until June 30, 2027.