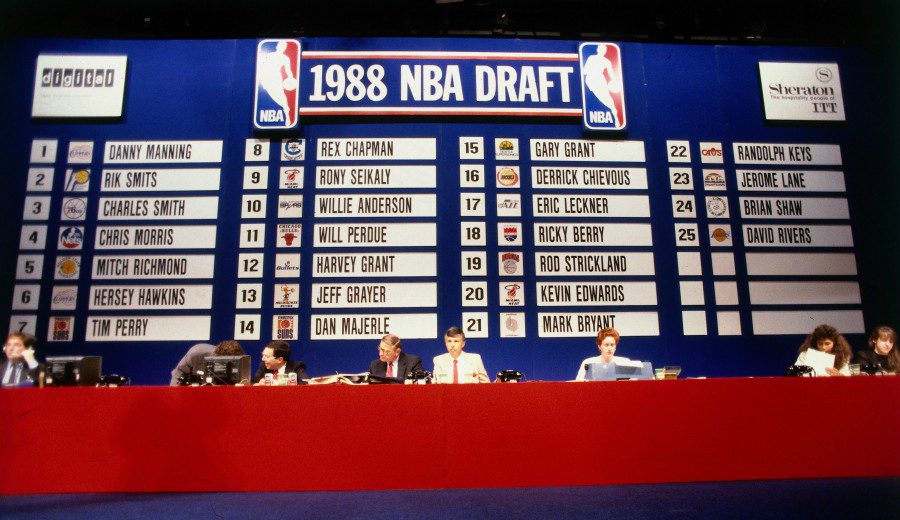 The NBA Draft is the system by which the League franchises obtain the rights in professional basketball of players who do not yet have a contract with any team in the competition. The order of election of said players will be established once the regular season has concluded, respecting the reverse order of classification based on their balance of victories and defeats, with the exception of the relocation stipulated by the Lottery Draft . At the end of June the election ceremony takes place and consists of two rounds for a total of 60 players.

The first NBA Draft dates back to 1947. On July 1 of that year, ten rounds of election were held for a total of 80 players selected by the teams that made up the competition at that time. The honor of being the first No. 1 in history went to Clifton McNeely , who was chosen by the Pittsburgh Ironmen and would never, ever play in the League.

In 1966, what became known as the 'territorial election' took place, which allowed NBA teams to choose players who came from the universities closest to the franchise city. While in 1978 a non-American player was chosen for the first time in the first round of the draft, in the case of Mychal Thompson , from the Bahamas. The following year, in 1979, Magic Johnson was the first player who had not completed the four-year college cycle to be selected by an NBA team.

To prevent the franchises from seeking the greatest number of losses during the regular season, the well-known tanking, in 1984 the first draft pick was assigned by the toss of a coin, with the worst team in each conference involved in this all-important head o cross. The following year the 'draft lottery' system came into effect, giving the New York Knicks the chance to pick No. 1 in the 1985 Draft, staying with Patrick Ewing . In 1990, they switched from envelopes to hype and balls as a method of the Lottery Draft.

In 2005, after Kevin Garnett made the jump from high school to the NBA ten years earlier (the first player to do so in more than 20 years), the League put a stop to the recent surge of inexperienced NCAA players from declared eligible, imposing the minimum age of 19 years to all those interested in being part of the promotion each year. This led to young people who preferred to sign for FIBA teams after leaving high school and playing for a year with a salary before making the leap to professionalism in the United States.

Since the last minimum age introduction, all players eligible for the draft must be 19 years old or in the year in which they are reached. This rule also affects international players, that is, those who reside outside the borders of the United States and who have not enrolled in any university in the country. These two casses must be declared eligible within the deadlines stipulated by the NBA, becoming part of the list known as early entries .

All players who have completed four years of college or are over 22 years old and are not part of any NCAA team will be automatically selected in the draft. This affects US and international players, regardless of whether the latter have had a professional contract outside the NBA.

The first three elections of the draft are drawn in the so-called Lottery Draft , in which the fourteen franchises that have not qualified for the playoffs enter, having a higher percentage of chances of winning the lottery based on the number of losses achieved during the season. The lottery is done by pulling ping pong balls into a bass drum. The 14 teams involved have one ball each, numbered from 1 to 14 and a total of 1,000 4-digit combinations are assigned to those sets.

As of 2019, the three worst teams have a 14% chance of being chosen to take number one, the fourth worst team a total of 12.5% and thus the percentages are reduced. Once the top three NBA draft spots are assigned, the rest of the teams continue the list in reverse order of ranking. The franchises that compete in the playoffs complete the table following the teams in the Lottery Draft.

The draw is normally held the third or fourth week of May, in private, with the 14 involved, NBA officials and the press present.

All the number one in history

Below we offer you the list of all the players chosen in the first position of the NBA draft throughout its history, from 1947 to the present.